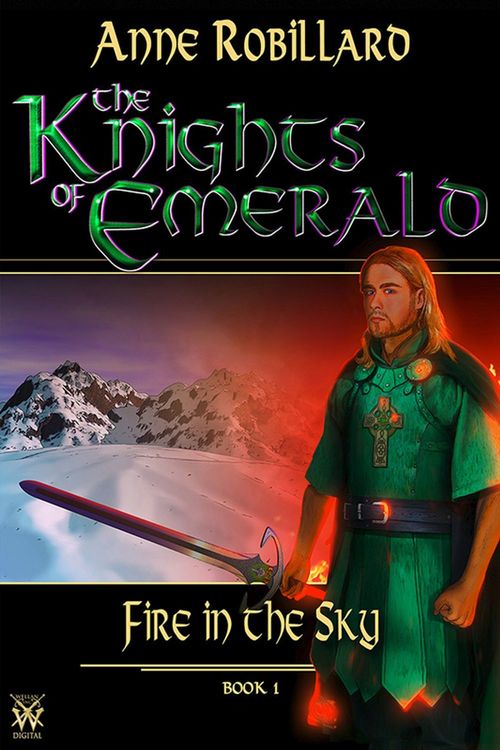 The Knights of Emerald 01 : Fire in the Sky

The Knights of Emerald : This epic tale takes place in a forgotten world in a time of great unrest as Amecareth, the Dark Lord of the Insect People, attempts to take over the known universe. It is the story of Kira, the purple child, born of the rape of Queen Fan of Shola by the despicable Emperor, who will ultimately bring about his downfall, and of the brave Knights of Emerald entrusted with her safety.

Book 1 of the saga The Knights of Emerald, Fire in the Sky : Upon learning that Amecareth is preparing to invade the continent once again, the King of Emerald, in an effort to protect all the Kingdoms of Enkidiev, revives an ancient knighthood. Chosen for their special gifts and endowed with mystical powers, six men and one woman become the new Knights of Emerald. Their training now completed, these magical soldiers are about to leave for battle when Queen Fan arrives at the castle requesting an audience with Emerald I. Pressed for time, she leaves in his care her two-year old daughter Kira, fully aware of the part she will be playing in the future of mankind. Wellan, the undisputed leader of the knights, falls in love with the beautiful queen. But the Kingdom of Shola is the first to fall and everyone is slaughtered, including Fan. Heartbroken, Wellan will nonetheless have to come up with a plan to defend Enkidiev and repel the forces of evil.