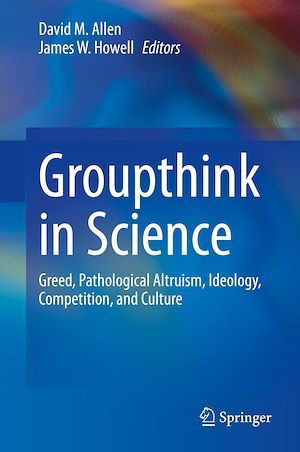 This book discusses one of the hottest topics in science today, i.e., the concern over certain problematic practices within the scientific enterprise. It raises questions and, more importantly, begins to supply answers about one particularly widespread phenomenon that sometimes impedes scientific progress: group processes. The book looks at many problematic manifestations of "going along with the crowd" that are adopted at the expense of truth. Closely related is the concept of pathological altruism or altruism bias-the tendency of scientists to bias their research in order to further the ideological or financial interests of an "in-group" at the expense of both the interest of other groups as well as the truth. The book challenges the widespread notion that science is invariably a benevolent, benign process. It defines the scientific enterprise, in practice as opposed to in theory, as a cultural system designed to produce factual knowledge. In effect, the book offers a broad and unique take on an important and incompletely explored subject: research and academic discourse that sacrifices scientific objectivity, and perhaps even the scientist's own ethical standards, in order to further the goals of a particular group of researchers or reinforce their shared belief system or their own interests, whether economic, ideological, or bureaucratic.